Designed by Alberto Romanos, Bw Aleta is a multi-purpose geometric font family with humanist traits. Its wide proportions, straight-forward drawing and generous modulation on selected areas, all build towards a contemporary & sharp personality.

Bw Aleta font family is deployed as two distinct subfamilies: No. 10 is the quirkier sibling celebrating all its angles, while No. 20 presents a slightly quieter feel. Each subfamily consists of 18 styles (9 uprights + 9 matching obliques) supporting all European Latin languages. 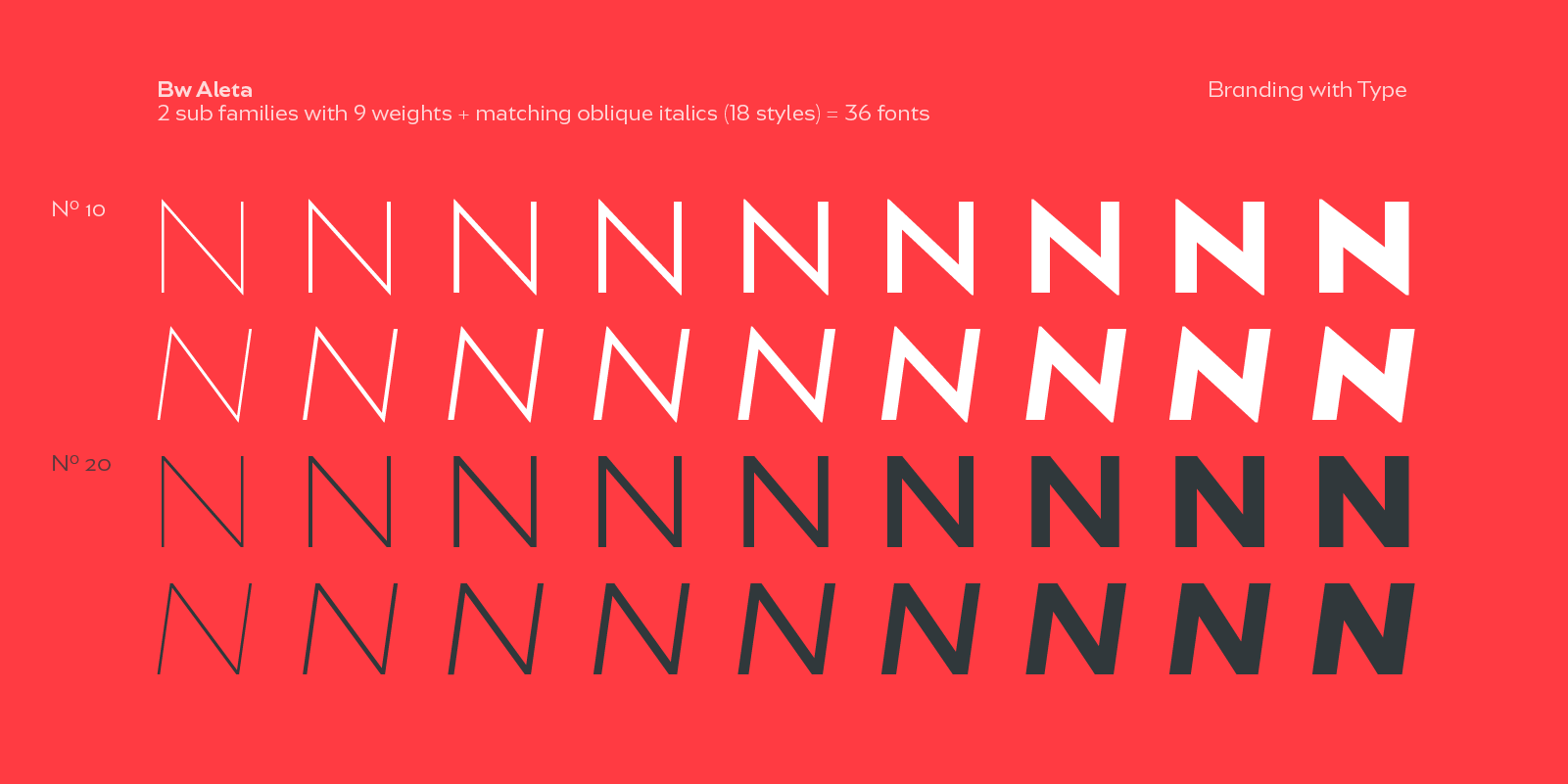 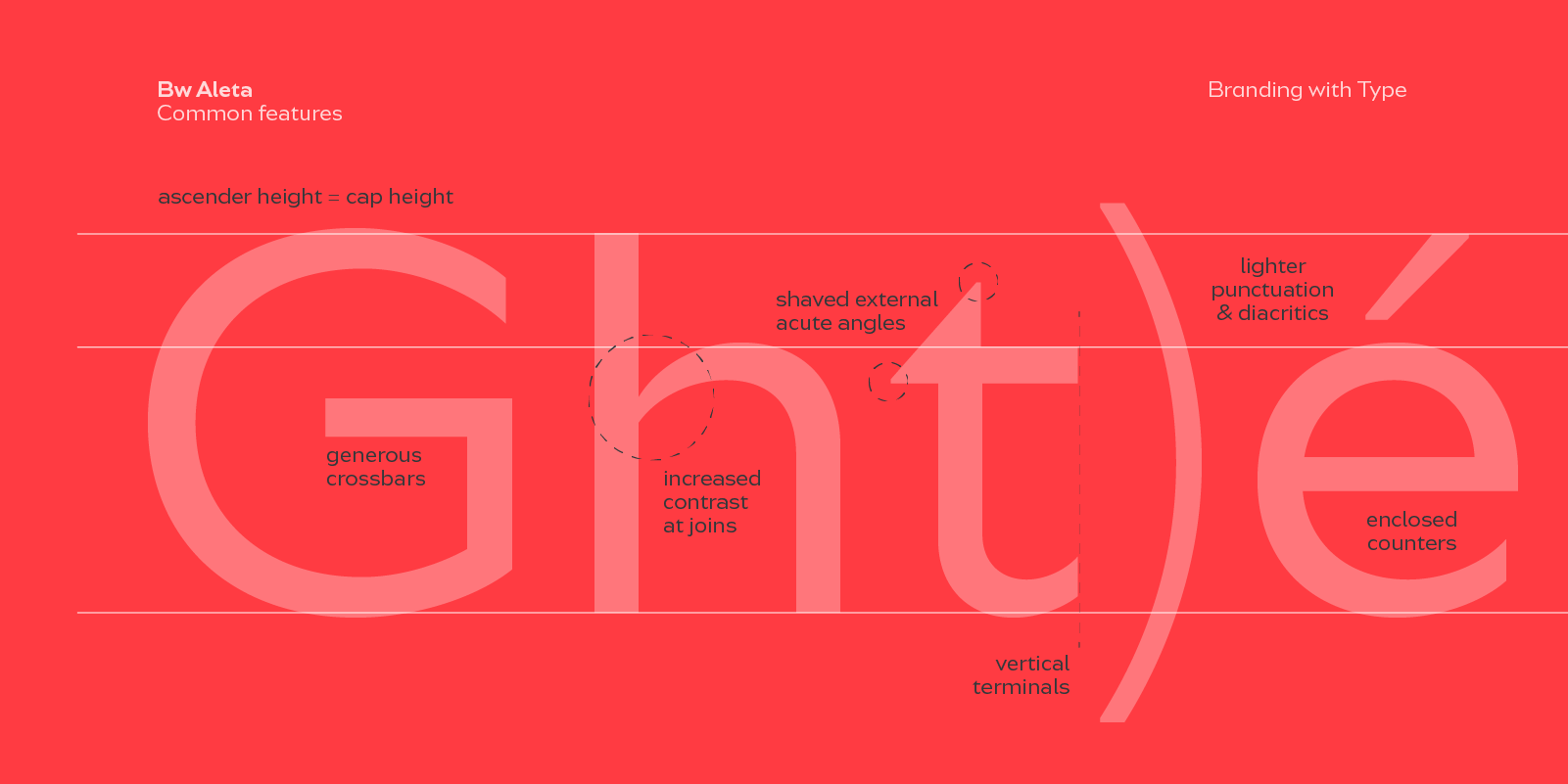 Common to both subfamilies is the almost perfectly circular letter “o”, both in upper and lowercase, informing the wide proportions of the typeface. Bw Aleta also features stroke modulation only when it matters, contributing to a minimal and contemporary feel while avoiding neutrality. The result is a highly functional font family with bags of character, well suited for branding, advertising or editorial projects. 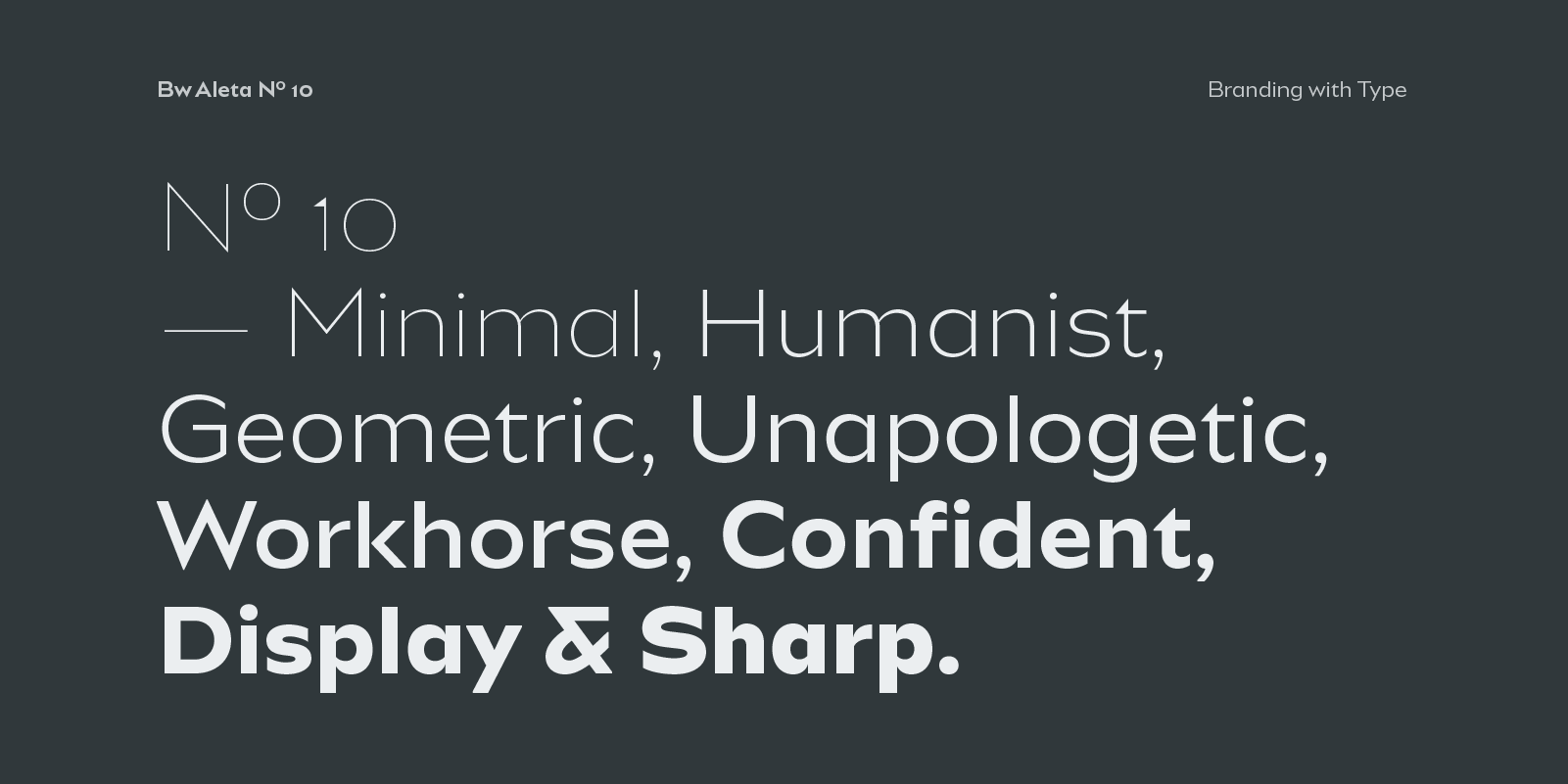 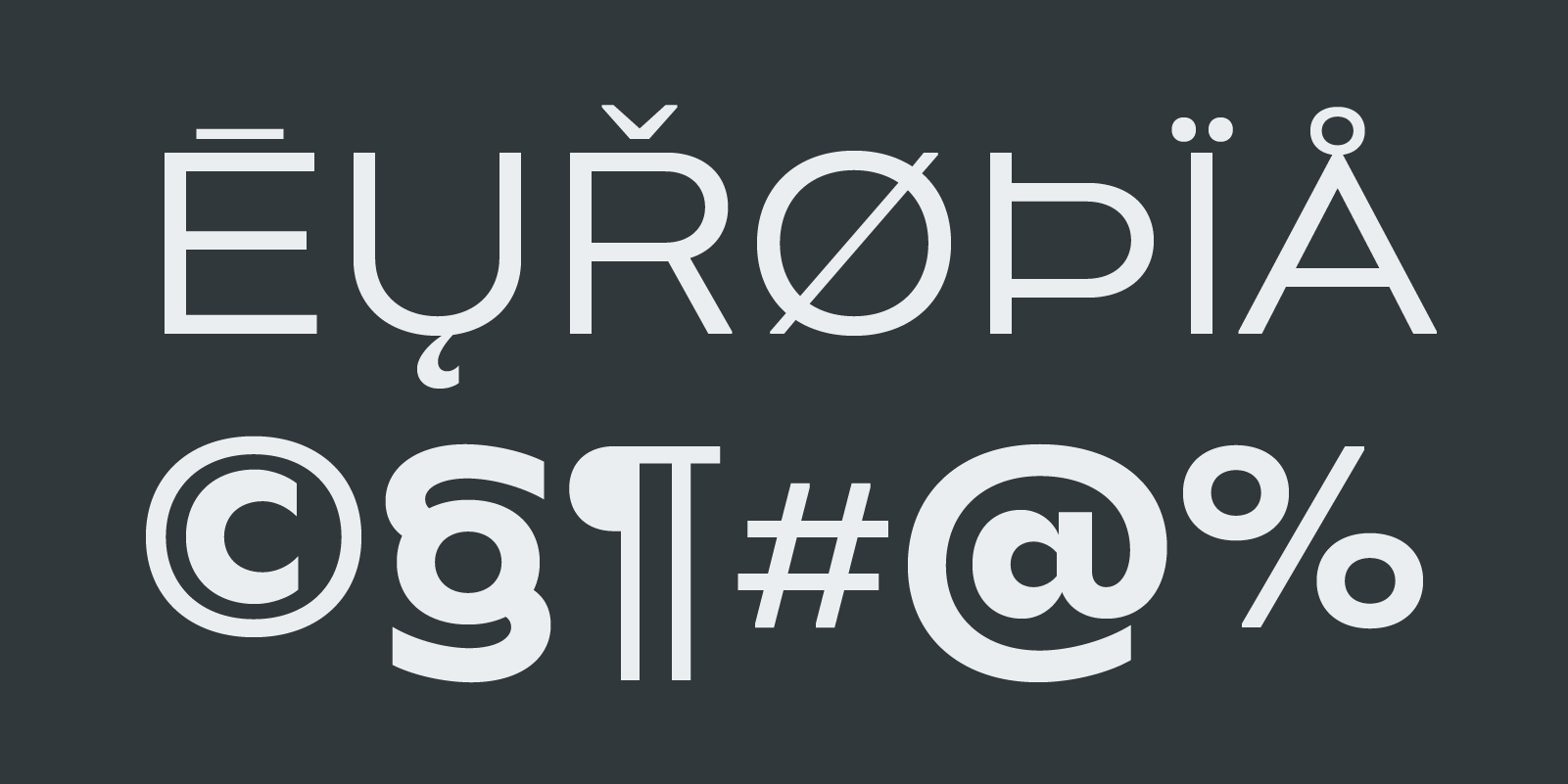 You could argue Bw Aleta No. 10 would be more suited for display purposes where it shows off all its quirky details, and this is true for the lightest weights with the triangular fins standing out in contrast with the thin stems, but it’s equally confortable at small sizes over long paragraphs. 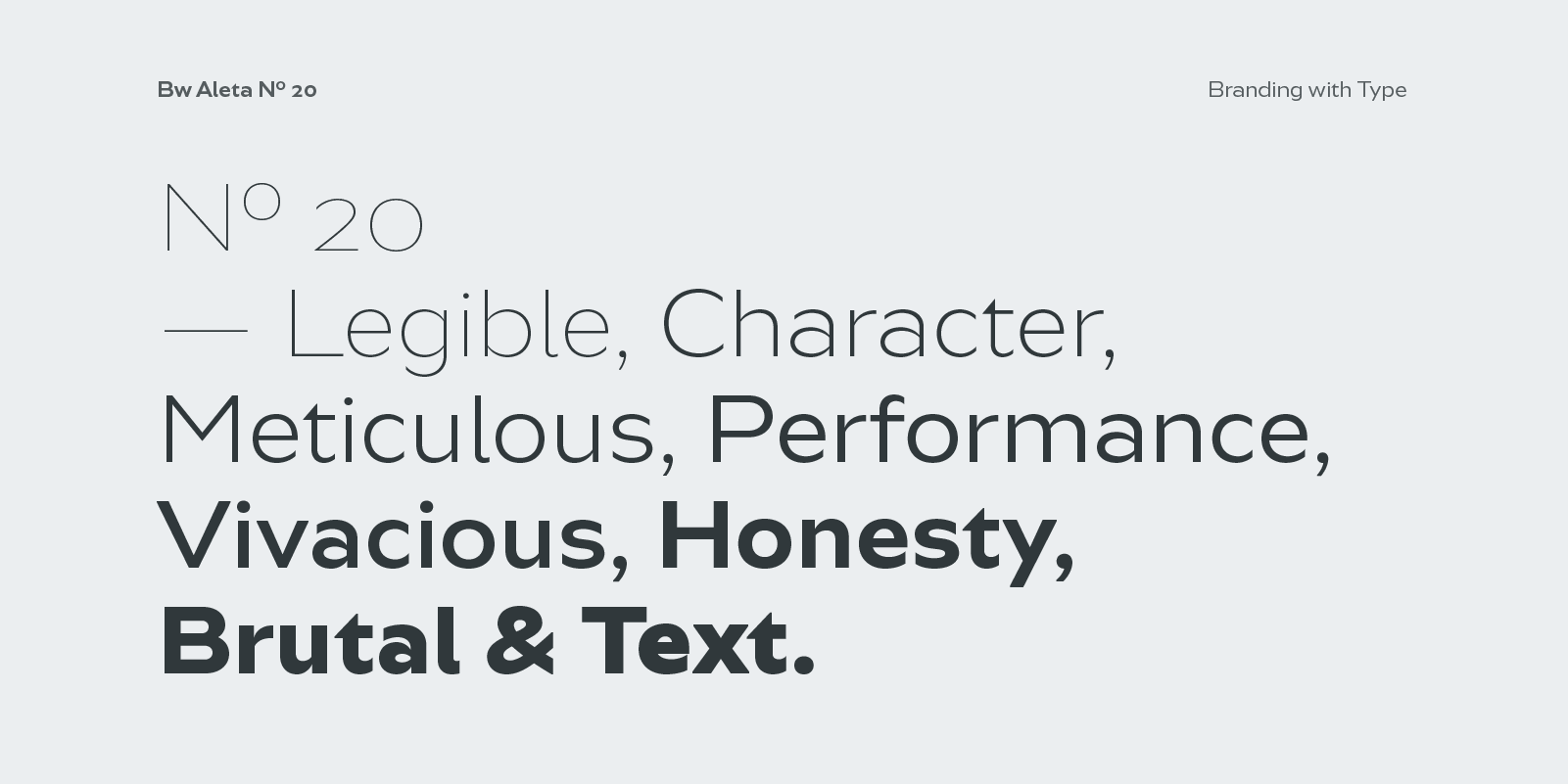 Bw Aleta No. 20 takes a small step back and presents certain modifications in order to increase its legibility, conveying a slightly more traditional feel without loosing its character. As well as the obvious double storey “a” and the tail on the lowercase “l”, all the blunted apices on the triangular shapes create a better balance between fills and counters, helping conforming a more homogeneous texture when setting paragraphs.

Among the OpenType features included on the Bw Aleta font family you could find Old Style figures, fractions, case sensitive and localised forms.

All our font families can be licensed under any our our standard Desktop, webfont, desktop + webfont and the exclusive Branding with Type all-in-one licenses.

Click here for more images of Bw Aleta and all its licensing options.

This website uses cookies to improve your experience while you navigate through the website. Out of these, the cookies that are categorized as necessary are stored on your browser as they are essential for the working of basic functionalities of the website. We also use third-party cookies that help us analyze and understand how you use this website. These cookies will be stored in your browser only with your consent. You also have the option to opt-out of these cookies. But opting out of some of these cookies may affect your browsing experience.
Necessary Always Enabled

Any cookies that may not be particularly necessary for the website to function and is used specifically to collect user personal data via analytics, ads, other embedded contents are termed as non-necessary cookies. It is mandatory to procure user consent prior to running these cookies on your website.